A 14th-century castle, but a very modern lord 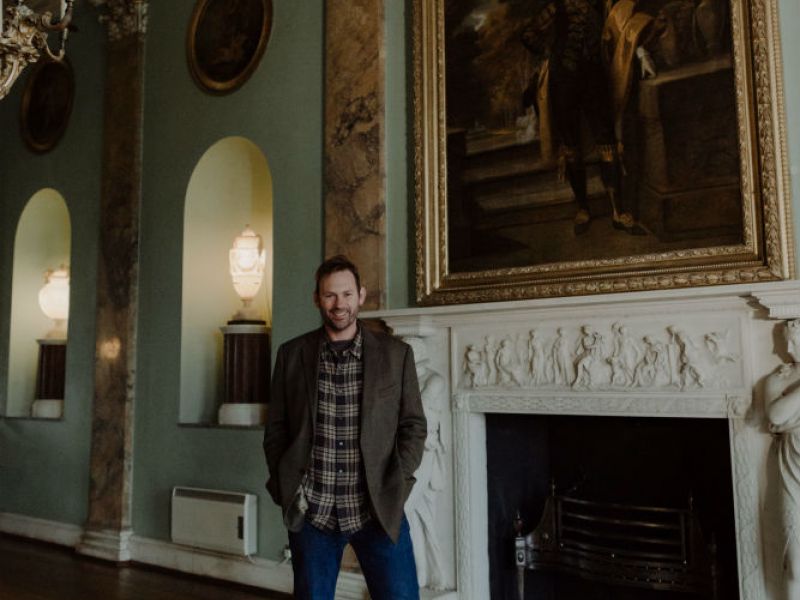 Charlie Courtenay, the 19th Earl of Devon, leads a double life. Half the week, he works in London as an intellectual property barrister and as the newest hereditary peer in the House of Lords; the rest of the time, he’s the 28th generation of his family to run Powderham Castle, the 14thcentury manor house near Exmouth, Devon.

Born in 1975, he grew up at Powderham, the son of Hugh Courtenay, the 18th Earl of Devon and his wife, Diana. After Eton, Cambridge and the Bar, Charlie went to Los Angeles on a rugby tour. He found a reason to stay when he met the actress Allison Joy “AJ” Langer, of Baywatch and My So-called Life fame, in a bar in Las Vegas. It was love at first sight. The couple were married in 2004, and settled down to life in California with their two children, Lady Joscelyn, 11, and Jack, Lord Courtenay, nine.

In 2014, they moved to London, and then in June 2015, to Devon, to replace Powderham’s general manager who was retiring. Shortly after, Lord Devon died, leaving Charlie and AJ – as they are universally known – the new Earl and Countess of Devon, in charge of the house and the 3,500-acre estate on the banks of the River Exe. “Suddenly,” laughs AJ, “we had an actress and a lawyer running the estate!”

It’s been a whirlwind three years since then. Their first job was to host 50,000 teenagers for Radio 1’s Big Weekend in May 2016. This signified a regime change at Powderham. “The Big Weekend was the first event that I booked,” says Charlie. “We got to launch our stewardship to a bunch of teenagers.”

That December they were filmed as part of Mary Berry’s Country House Secrets programme, and they now have relaunched the public tours of Powderham. They have also started a new upstairs-downstairs tour of the former staff rooms and a farm shop that sells produce from the local area, including lamb and venison from the estate.

“Powderham has always been a public building, but it is also a private home, so running the two tours allows us to focus on that,” says Charlie. “We’re a bit of a hold-out in the respect of still having guided tours, but with a guide you can pitch the house to your audience.”

Living in and running a country house was a more natural fit for Charlie, whose father, Hugh, was born in the house – in the same bed in which the flamboyant 9th Earl of Devon, William “Kitty” Courtenay, was caught in with art collector William Beckford in 1784. But for his all-american wife, who by her own admission was more at home in a camper van than a medieval castle, Powderham was a big change.

“Charlie could have found a girl that liked big, pretty houses,” she says, recalling her first impression of Powderham. “I couldn’t take it in, and I don’t know if that’s changed.” She has grown to love it. “Your imagination comes alive as soon as you come up that driveway. It looks like the most romantic place; it’s such a separation from so many people’s realities to come here, it helps you get a different perspective.”

Powderham Castle was built in 1390 by Sir Philip Courtenay, one of several castles owned and built by competing branches of the family in the region. It’s a castle in name, though not in nature, without a keep or a moat – but it has seen more than its fair share of history. During the Wars of the Roses, the 5th Earl of Devon laid siege to Powderham; during the Civil War, it was garrisoned by Royalist soldiers. Charlie is proud that the house tells the whole of Devon’s story. “So many other grand houses are built for a single person at a single time: the story of Blenheim is 1710-1740, whereas Powderham is 1390-1880.” The Chapel Grange was built in the 1400s; the medieval Marble Hall, hung with family portraits, contains a 1740s long case clock; the 18th-century rococo staircase hall has “Powderham blue” walls; the libraries are Georgian, hung with various portraits of Powderham matriarchs. Through a secret door is the Music Room, built by Kitty Courtenay, and designed by the Regency architect James Wyatt in 1794.

Finally, in the State Dining Room, carved coats of arms on the walls trace the Courtenay family’s 900-year-old story. The house is big, Charlie admits, but it is not a palace; there’s just over 100 rooms, 30 or so of which are bedrooms, with more than 35 staircases.

It’s a heck of a lot of house for four people. In time, Jack, Lord Courtenay, will inherit Powderham. “I don’t want my kids to think Powderham is a bank to draw from,” says AJ. Her goal is to make the place self-sustaining, “so that my children can be involved in whatever way that it serves them. I don’t want it to be as intense as it’s been for us, though maybe it’s that intense by nature. For Charlie and I, this is the kind of challenge that we would rise to, but I can’t say that my kids are going to be like that.”

The couple are totally devoted to one another, the children and to Powderham. “Charlie has an exhausting way of getting people to fall in love with this house,” says AJ. She is growing to feel the same. While her husband is working in London, she stays in Devon. “It’s like Charlie is walking away and trying to leave me with his baby.”

Last year, the house had more than 39,000 visitors. “People say, why do you run a visitor business, it’s not profitable,” Charlie says. “If you were being hard-nosed about it, you’d only open for big concerts and private functions. That may well be easier.”

Nevertheless, he’s keeping Powderham open, with the aim to make the house wash its face.

“Then we’ll be in a position to reinvest in pictures, and roofs... and all the rest.”