Another day out by our guest blogger Chrissy Harris

Powderham Castle has been part of Exeter’s landscape for more than six hundred years, so it was probably about time we paid a visit.

Set in a beautiful deer park on the banks of the Exe estuary, the family home of the Earl and Countess of Devon was the perfect place to spend a slightly damp summer’s day.

It certainly looks the part. The mighty castle building looms large as you approach the courtyard, much to the delight of my young companions who had just been forced to spend half-an-hour looking around the (lovely) plant shop on the estate.

We joined Powderham tour guide Dave who led us on a fact-filled hour around the castle, which was built by Devon’s famous Courtenay family in 1391.

Jake, nine, who loves old stuff and new information was hooked and, more importantly, quiet. In fact, all the kids on the tour were very well behaved, thanks to Dave’s engaging style and the fact that youngsters are handed a trail to complete around the house.

You have to listen out for clues and then mark off your answers on a tick sheet to win a medal. This was enough to keep Alice, seven, focussed. She really likes medals.

The castle/house itself is magical, with several secret doors, a beautiful music room - complete with domed ceiling- and some pretty amazing 18th Century “Rococo” plasterwork that sweeps around the stairs and landing. It was enough to give me some serious Late Baroque-style plasterwork envy. My walls seem so flat and dull now.

I’m also a sucker for a walled garden and there’s a lovely one here with a Victorian greenhouse.

Not only is it a fine example of these historic structures but it’s got picnic chairs and tables inside so we could eat our sarnies in the dry.

The garden is also home to Powderham’s play area and pets corner. The kids spent ages peeking in to the various pens and cages to see the tortoises, guinea pigs, chickens and Harry the donkey.

Despite the mizzly rain, the animals seemed pleased to see us and Jake took a real shine to Tessa the tortoise.

We managed to drag him away to take part in the outdoor trails where we had to find more clues, this time tree and animal related.

There was just enough time to do a quick walk to the lake and have a roll down the grassy banks (in the deer poo, as it turned out. Never mind). It was a good excuse to take in the views – miles and miles of rolling Devon countryside as far as the eye can see. 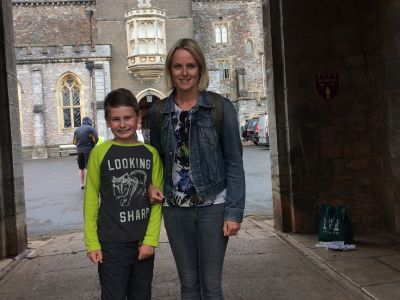 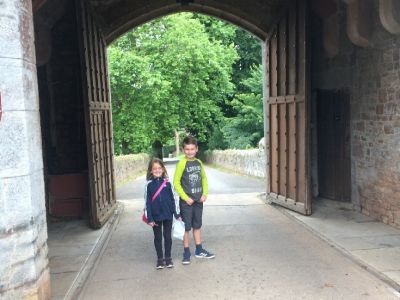 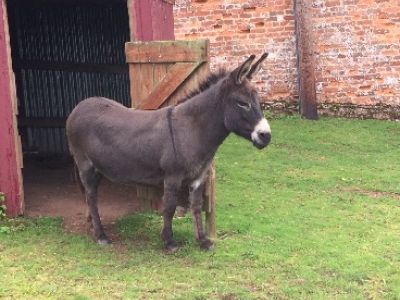 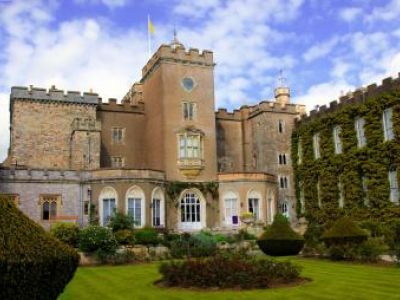