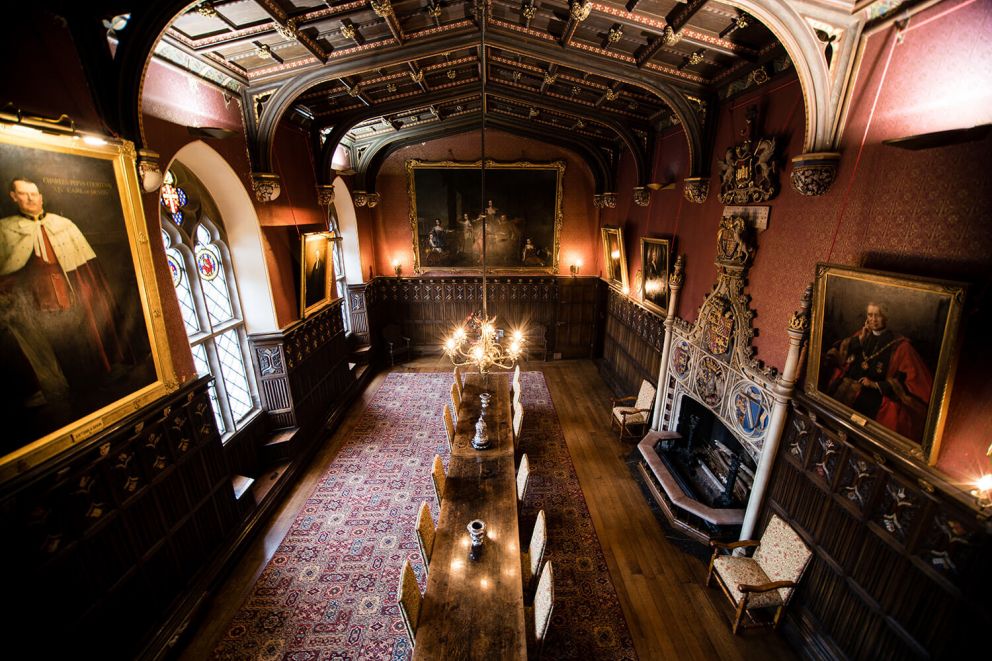 Join one of our guided tours to hear the history of the Castle and the Courtenays.

On our Castle tours you will see the many majestic rooms and hear fascinating stories about the Courtenay family as told by our knowledgeable and engaging guides. All of our guides adapt each tour to suit their audience, so it is an entertaining experience for all!

The State Room Tour guides guests through the gardens, the grange and the grandest rooms of the Castle – the public face of Powderham.  Visitors explore chronologically Powderham’s illustrious architectural history, from its medieval foundation, through Civil War sieges, Georgian, Rococo and Regency expansion, to its dramatic neo-Gothic culmination.  All of this via secret doors, long libraries and even a hidden ballroom.

The Upstairs Tour offers a different view – Powderham as a private home of the Courtenay family and their staff for over 600 years.  Charlie and AJ invite visitors into never-before-seen family bedrooms, and offer a host of intimate and personal insights, spooky stories, and winding staircases used for generations.

To accompany the tour routes, we recommend our Powderham Castle guidebooks, written by Charlie himself, sharing for the first time his own stories of growing up at Powderham, and what he has learned of his remarkable home.  For old and new visitors alike, this is the perfect time to come and explore the Home of Devon.

You can check our tour availability here. All tours are limited to around 12 participants.

Explore the Castle at your own pace in our daily Open House sessions.

For those who love to explore, discover our Open House sessions, allowing you to visit the State Rooms and find out the hidden secrets of the Castle at your leisure.

Our knowledgeable team of guides and stewards will be situated throughout the Castle to answer any questions you might have. If you'd like to take a deeper dive into the Castle's history, join one of our fascinating specialist tours!

Tours run daily and will feature a variety of topics, from the Courtenay History on Canvas, to the Unscripted & Unseen. A description of each tour can be found below.

All tours are limited to around 12 participants.

The Courtenays and the Crown, with Peter

Over the 600 years that the Courtenays have been at Powderham, there have been times where the family have been well connected to Royalty. This tour focuses on those connections.

The Courtenays on Canvas, with Andy

The story of the Courtenay family and their place in the history of Powderham as told through the portraits and other paintings in the State Rooms.

The Tudor Courtenays, with Abi

A general tour of the State Rooms with an additional focus on the Tudor connections with the Courtenay family.

The Evolution of the Castle, with Dave

A look at how the Castle has changed over the 600 years of its existence, from its medieval beginning, through to the Georgian and subsequent Victorian developments. This tour follows a unique route which endeavours to clarify how the Castle looked in these various periods by looking at areas in a chronological order of their appearance.

Back to front-inside and out, with Paul

This tour explores the Chapel, State Rooms, and Rose Garden.

A chance to explore the hidden corners of Powderham that are off the standard tour route.

Triumphs and Tragedies, with Leah

A tour that explores the highs and lows of the Courtenay family and that of Powderham itself from the medieval through to the present day.

Behind the Scenes, with David

A chance to see some of the parts of the Castle which were used by staff or lived in by the family, and not the public spaces designed to impress. This is unsuitable for this who find stairs difficult.

Unscripted and Unseen, with Katie

This tour is for all who like to explore. Discover rooms not on the tour route and not before open to visitors. This tour has lots of stairs and uneven floors, so come prepared and bring your sense of adventure along.

The 9th Earl, with Katie

Join Dr Edwards to learn about the fascinating life of one of Powderham’s most notable Earls, the 9th Earl of Devon. Learn of his great love of family, the scandal that people still talk of today and of his passion for the arts and botany. Hear about new research and discoveries regarding Powderham’s LGBTQ history. We offer special rates for groups of 15 or more.

Occasionally, for maintenance to be carried out or for a private function some rooms are closed off to the public so the tour is adapted. Please call ahead of your visit and we can let you know if there is anything scheduled. Make the most of your day at Powderham Castle. Every season there’s a reason to visit Powderham Castle. We welcome all kinds of special interest and educational groups.