The Secret Garden Play Area & Pets Corner is home to the many friendly Powderham pets and our adventure play area. A donkey, pot-bellied pigs, goats, guinea pigs, chickens, sheep, and stick-insects, to name but a few, live here in a blissfully happy environment and enjoy the company of visitors, children and adults alike.

The Garden is on a south-facing slope and has a glasshouse built by the architect Charles Fowler, which now provides a wet weather shelter for visitors and is used by the Estate to supply plants to the Plant Centre at Powderham Country Store, the delightful small shopping complex just within the Castle gates.

The Secret Garden is also home to the Courtenay Fort and a family picnic area.

The Secret Garden Play Area & Pets Corner are open from 10.00am; closing times will vary during the season, please check on arrival. The Secret Garden is accessible to visitors with wheelchairs and pushchairs, although there are some steep slopes.

Children inspired by their visit to the 600-year-old real Castle can let their imaginations run wild in Courtenay Fort, located within the Secret Garden, and play at being heroic knights and princesses - defending their prized Fort.

Designed and built by a South West company, the Fort spans 21m, with a central turret 4.2m high, a suspension bridge, nets, parallel bars, climbing wall, monkey bars, slide and many other exciting features, and is a perfect play area for the under-12's. Children must be supervised at all times. 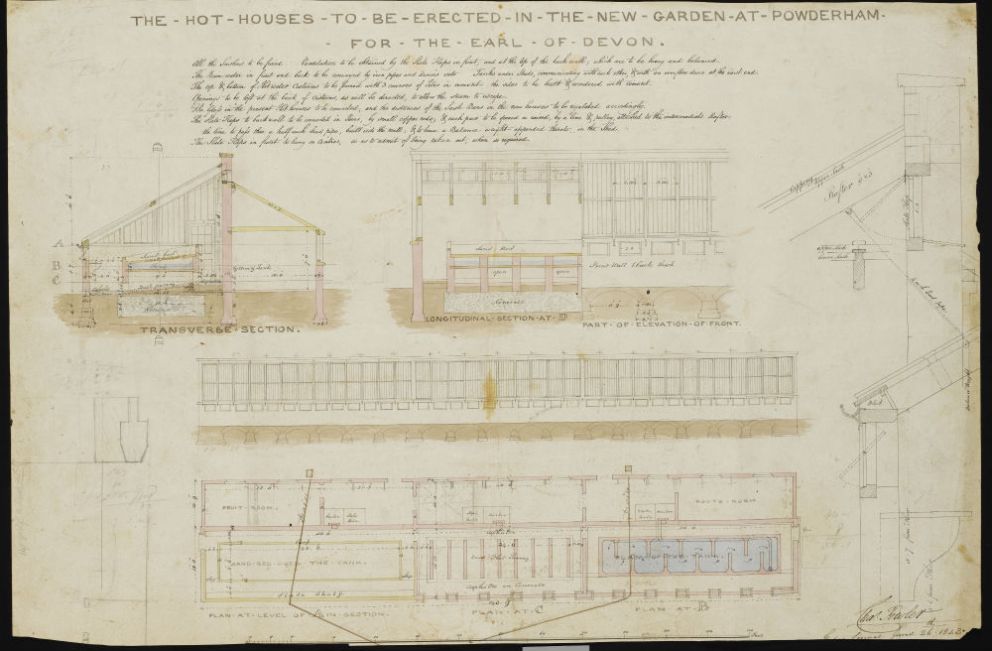 Records from 1728 and 1740 refer to a wide range of fruit and vegetables, including Indian jasmine, myrtles, and oranges. Accounts for the Powderham kitchen garden from 1810-1812 note at least 13 different apple trees, 10 varieties of pear, 6 kinds of plum, and 5 kinds of cherry as well as damsons, greengages, peaches, apricots, nectarines, mulberries and pineapples. Interestingly the accounts show sales to the public, indicating a very productive garden.

The buildings in the Kitchen Garden were allowed to become dilapidated and by 1845 Charles Fowler had replaced the old buildings with a range of hot houses and sheds.

At some point between 1839 and 1888 the Kitchen Garden was relocated to its present site. Plans in the Devon record office show a conservatory and peach houses in about 1860, and this may have been the date of the construction of the new Kitchen Garden.